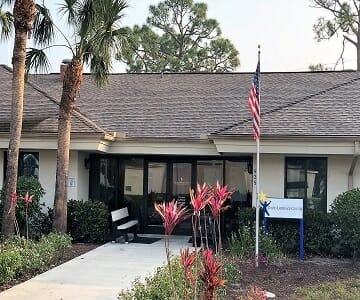 Mariana Perez has always looked out for the little guy …and still does so, serving a community in great need at DLC’s Immokalee office.

Mariana Perez used to get into fights as a little girl growing up in Colombia … not because she was a troublemaker, but because she was looking out for those in need. “Since I was very young, I always felt the need to be with people who were bullied,” she says. “I was always defending them. I used to get in fights for them, because I thought it was unfair. It’s just something

that’s always been with me.” And it still is. Today, Perez defends the relatively defenseless as Clinical Coordinator at David Lawrence Center’s Immokalee office. She’s serving a community of mostly immigrants—many of them undocumented—who often feel lost and alone in American culture while facing extreme poverty, language barriers, and the day-to-day demands of life. Many struggle with alcohol problems. For her selfless efforts, Perez was recently named a Distinguished Healthcare Diversity Advocate by the National Diversity Council.

The recognition goes to those “who have made a difference in the diversity and inclusion realm through their research or achievements, and exemplify the ability to excel in the healthcare field.”

Perez has been with DLC for eight years, including the last seven in Immokalee. She loves the people she serves, a demographic that faces a constant uphill battle.Many of them are “bullied” by the hurdles they face on an ongoing basis.

“When you work with a multicultural approach, you have to be able to understand the client. It’s not about my way of seeing them. It’s how they see themselves.”

“Our community is mostly farmers from Central America and Haitians,” she says. “Many are undocumented. They have little to no education. They’re very poor. They’re hungry; they get a lot of their food from food pantries. They live in old, broken-down trailer homes, often several families in the same home. Their lives are hard.” And Perez dives right into the middle of it with joy day after day, making the commute from Naples—one of the most affluent communities in America—into the heart of crushing poverty and living conditions. She’s still defending those who are beaten down.

The bilingual Perez, who was also DLC’s 2016 Employee of the Year, makes an effort to learn about the cultural backgrounds and unique needs of those she serves.

“Everybody thinks that because we all speak Spanish, we’re essentially the same culture, and that we all see everything the same,” she says. “But that’s not true. There are big differences from culture to culture. Somebody from Cuba might say ‘I feel nervous,’ but what they call ‘nervous’ we call anxiety.

It’s her heart’s mission–she says it’s hear calling–to put herself in their shoes.

“When you work with a multicultural approach,” she says, “you have to be able to understand the client. It’s not about my way of seeing them. It’s how they see themselves.”